Congratulations to our good friends Jessy and Steve who got engaged last night! We're so happy for you two and know you're going to make a great married couple! Hooray!
Posted at 5:28 PM Labels: friends, happenings
Email ThisBlogThis!Share to TwitterShare to FacebookShare to Pinterest
0 comments

Here are a couple of photos of the severe weather and a video of the hail storm today. For the last two days our area has been under tornado watches and warnings and we have experienced heavy hail and high winds. I'm kind of a big fan of severe weather - as long as I'm safe inside! 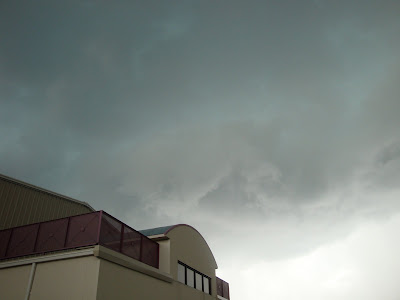 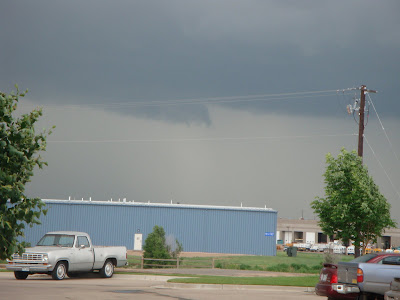 It was a banner weekend - we took Gromit camping for the first time! I have waited so long to get a dog and take it camping (three years ago when we bought a tent I made sure it had a pet den in anticipation of one day owning a dog) and I was so excited that this weekend finally came! 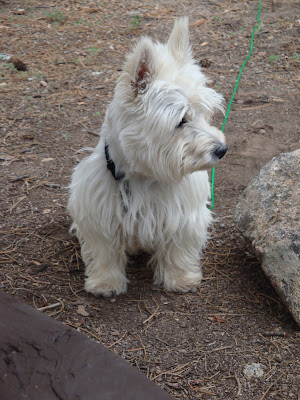 Gromit loves being outdoors and he certainly loved being outside for an entire weekend. He explored the campsite as Dave and I set up our tent, canopy and other gear and found great joy in rolling in the dirt. He sure knows how to drive me crazy! I quickly gave up on trying to keep him clean as I continued to watch him roll around after I would brush him off. He spent a good part of our first evening "patroling" the campsite by walking around the canopy over and over looking into the darkness. Who knows what he was looking for or at, but it was kind of nice knowing he was looking out for us. 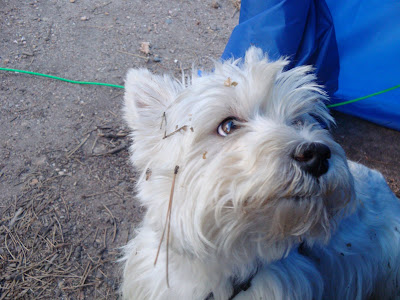 On Saturday morning we had a visitor to our campsite. Gromit couldn't get enough of just staring at the elk and the elk stared right back at Gromit. He didn't bark at her, he just stared. I wonder if he'll ever bark! 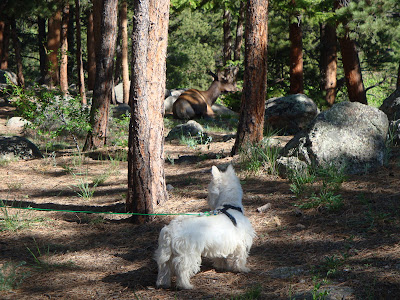 We also went on a three hour hike and Gromit held up pretty well. He did get tired near the end of the hike and he was moving pretty slow... until he saw a chipmunk. He got a second wind after seeing that furry thing scurry in front of him and into some rocks. The rest of the way down the mountain he was on the lookout for more chipmunks. Silly dog! 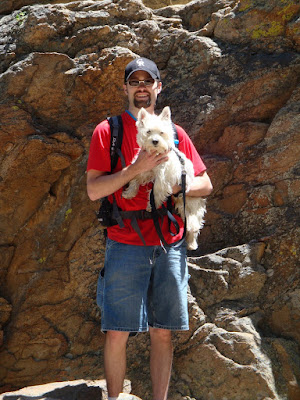 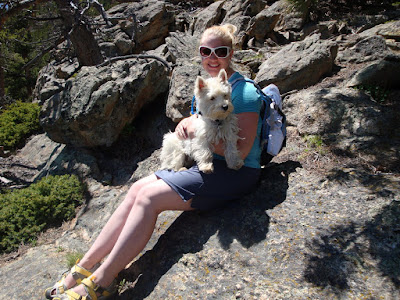 The second night Gromit seemed to be more at ease at the campsite and spent a lot of time napping in the dirt and recovering from his hike. He also found a new comfy place to sit while we were eating dinner - our camp chairs! I guess we'll need to bring one for him from now on ;-)

Before we went home we went on a scenic drive and Dave snapped this great picture of Gromit looking out of the window. What a cutie! We can't wait to take him camping again this weekend! 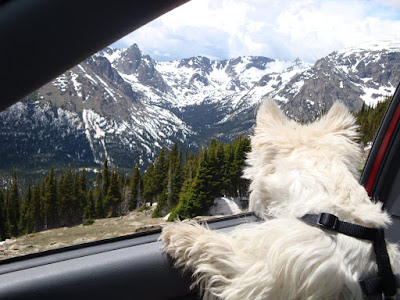 Ready or not, here we go!

I'm enjoying my last few moments of peace before our crazy and hectic summer begins. For the next nine weekends (yes, 9 weekends) we have something going on which will prohibit us from using that time to do laundry, plan, prepare and relax for upcoming weeks. We have a lot of exciting things that we are really looking forward to including weddings, family reunions, camping trips, conferences and concerts and my organization and planning skills will be tested as I will be forced to to a lot of "home" things during the work week! Yikes! Ready or not, here we go!
Posted at 5:20 PM Labels: fun, happenings, thoughts
Email ThisBlogThis!Share to TwitterShare to FacebookShare to Pinterest
0 comments