I know it's been a while sine I've blogged about any non-tragic or big happenings but that's because we've just been so darn busy lately. This will be my attempt to catch you up on what we've been doing.
May 22- Kelly graduated from high school!
Hooray! After four long years of high school Kelly walked across the graduation stage with a high school diploma! We celebrated with an open house the following Saturday and we got to catch up with many family and friends that we haven't seen in a while. We also got to play some serious Guitar Hero since we brought our XBox360 down for the party.

We're so excited for Kelly to attend our alma matter in the Fall - CSU!

May 30- Trisha and Chris got married!
Wedding weekend No. 1. This weekend started out with a... bang? The Thursday before the wedding was the rehearsal dinner and bachelorette party. One of Trisha's long time friends was put in charge of the evening. L-O-N-G story short, we went to some bars in Denver, me and Sam went back to the motel while the rest of the group headed to a gay strip club, I fell asleep in the motel room, I heard some loud girls outside (from our group) of the motel room but fell back asleep, I heard the motel manager yelling at the girls to be quiet and then yelling because we had too many people in the motel room but I fell back asleep, I was woken up at 3:00 a.m. by the Denver Police saying that we were being kicked out of the motel and we had five minutes to get out, I packed up and called my Daddy to come rescue me, Dad and Curtis came to take me, Trisha and Sam (all of which I drove up from the Springs) back to my parent's house and Dad took the rest of the group to another hotel for the rest of the night. And that's all I have to say about that. 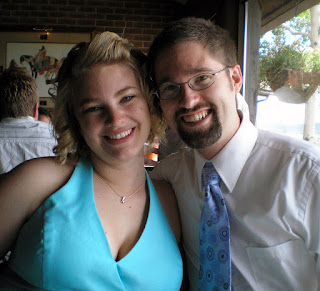 The wedding was Saturday morning and it was very nice. Everyone looked great and Trisha was stunning. Chris is such a lucky guy! As the MOH I was right there as the I do's were said and I felt privileged to be a part of their special day. Congratulations Chris and Trisha! 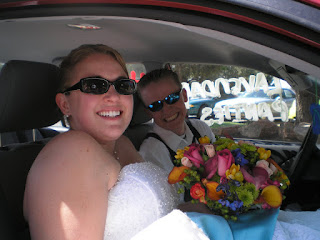 June 10- I tried sushi for the first time
It was the birthday of a guy Dave works with and a few people from the lab decided to go out to celebrate. This guy's favorite place is a sushi place and I had never eaten sushi or anything like it but I figured they would have some other type of food too so we decided we would go. We got there and the whole place smelled like fish and I am SO not a fish person. I was immediately turned off but Dave convinced me to go in. We were seated and EVERYONE else was ordering sushi so I was slightly compelled to do the same. Dave and I ended up ordering teriyaki chicken, a California roll and a tempura shrimp roll and we split it all (the rolls were 6 small pieces each). The texture was weird and it felt funny to eat something both crunchy and soft and seaweed is just an unfamiliar flavor to me. Overall it was pretty good but I don't think I would ever crave it...ever.

June 13- Dave and Jenny got married!Wedding weekend No. 2. It was another exciting weekend in the Springs. It started off with a rehearsal dinner BBQ at Cheyenne Mountain. Unfortunately some uninvited party guests showed up near the end of the evening... 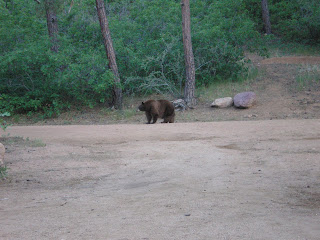 Yikes! I total there were two bears that stopped by the party. The first one (pictured above) was scared off by a car horn. We decided it was about time to pack up and head out and just as we had put the last of the food in the cars a bigger bear came down the mountain headed in our direction. It was so big and moving so fast towards us that we decided it wasn't worth trying to get a picture of it - we just booked it to the cars!

Again, it was a beautiful wedding and the bride was gorgeous! Being an event planner type, I thoroughly enjoy going to big events and seeing how other people do things and getting new ideas. At the wedding there was one of Dave's old friends from middle school. It was great to meet some of the other people who grew up with Dave and helped to shape him in to the wonderful man he is today! 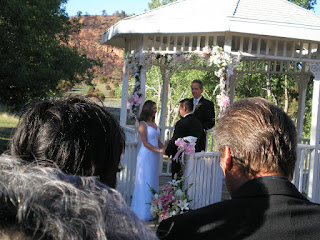 Overall the wedding was great and we had an awesome time. Congratulations Dave and Jenny!

June 21- 9 Cares Colorado Shares
This was simple - I got to sit outside for nine hours straight collecting food and money even though NONE of my afternoon volunteers showed up. If anyone has any thoughts on why people would sign up to volunteer and then not show up please let me know.

June 24- Welcome to the world, Lilly Anna!
Our friends (and Dave's long-time college roommate) Matt & Janeal welcomed their first child, a girl, into the world! She is just a doll and I can't wait to babysit her in coming years!

June 28 & 29- Brewfest!
Hooray Beer! There's this wonderful thing that happens in Fort Collins every year called Brewfest and it's where a lot of Colorado's brewers come to let the masses sample their brews. There are also live bands and great vendors that fill the streets of Old Town FTC. However, I do enjoy sampling the most! One of the interesting things that happens to me at Brewfest is that I always seem to run into the most random people from my past (and present). This year I ran into three new Zetas, one old Zeta, a good friend from high school, a guy I dated in my Junior year of high school, a friend of a guy I dated my senior year of high school and most of Dave's work buddies.

The other interesting thing about Brewfest is that it brings out the eccentrics. See if you can find the pirate, the hippy and the guy in a dress and fishnet stockings in the picture below dancing to the live band: 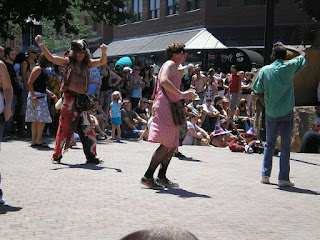 Well, I think that pretty much catches you up an what's been going on with us. I hope all is well with you. Cheers!
Posted at 7:36 PM Labels: Dave, friends, fun, happenings
Email ThisBlogThis!Share to TwitterShare to FacebookShare to Pinterest
0 comments

Every so often the place where I work gets the opportunity to can fresh produce at a cannery down in Denver. Being the volunteer coordinator I get the chance to go down and help can and I think it is so much fun! I've canned pinto beans, pear sauce and cherries in the numerous times I've been there.

Today was one of those canning days and I got to make something I have never made before - strawberry jam. This was certainly the stickiest if things I have ever canned. First we poured frozen strawberry puree into two large vats, added 13 LARGE bags of sugar and 3 even larger bags of powdered corn syrup to each vat plus pectin and once the mixture reached 180 degrees it was ready for pouring. We set up the assembly line - one person adding empty jars to the conveyer belt, two people using the hoses attached to the vats to fill the jars, me with a pitcher topping off all of the jars, one person moving the jars from the conveyer belt to the lid table, four people putting lids on the jars and two people taking the completed jars and placing them in a large metal bin. Once a metal bin was full it was moved to a cooker where the jars were boiled for 15 minutes then cooled with cold water. Once they dried we were able to wipe off any remaining water on the jars and send them through the labeler. Once they were labeled we put the jars in boxes, stacked them on a pallet and we were done! In total we made around 1,250 jars of strawberry jam and although it smelled great, I don't think I'll be eating any strawberry jam for a while.
Posted at 5:00 PM Labels: fun, happenings, work
Email ThisBlogThis!Share to TwitterShare to FacebookShare to Pinterest
0 comments